Install Aurasma on your device and scan the picture above.  Please let me know in the comments if it works for you.

Edit… It seems I have to share a link with you if you want to view the video link to this image. Send me a message to @teachernz on twitter if you want to try it.

Saturday was my third #EduCampAKL and well worth the caffeine fuelled  drive up from Hamilton to Epsom Girls Grammar School. There were lots of new faces, plenty of familiar ones and a few online friends that it was great to meet face to face for the first time.

It was a full house, populated by eager teachers/learners who saw the value in giving up their free time to connect with like minded colleagues from across the education sectors.  It was a day to further our understandings of third millenium pedagogy and the new tools that might be used to engage students and promote effective learning.

PD is often seen as something that is done to teachers (not always the case IMHO) but EduCamps/Barcamps are different. There are no reluctant participants; everyone who is there wants to be there. Twitter once again proved itself the WD40 of social oils and made it ridiculously easy to slip into conversations with strangers previously met online.

Ultimately though, the day was about people*. People sharing and discussing their thoughts, their successes, their pitfalls and reflections. A group of likeminded educators all willing to join with others to connect and collaborate. I wondered again what it would be like to work in a learning environment surrounded by these people.

Next… EduCampBOP …see you there!

I signed up for paperless day (April 22), but sadly wasn’t in class.  I kept my side of the bargain and my co-teacher ran a paperless programme for the day (and I most of the next day).

Students are busy working on movies, slideshows and blog entries about their day ( they’ll appear on the class blog), but here’s a taster of what Room 13 did.  Made entirely in Google’s Picasa with a soundtrack created in Aviary’s Myna audio editor. 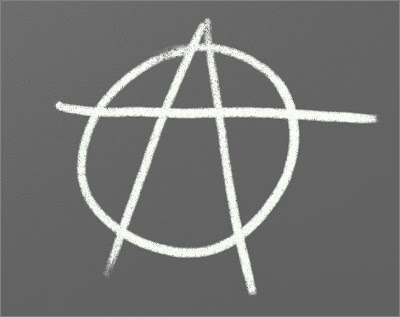 A couple of weeks ago I was happily twittering away when @timbuckteeth (Steve Wheeler) dropped the link below into the tweetstream. 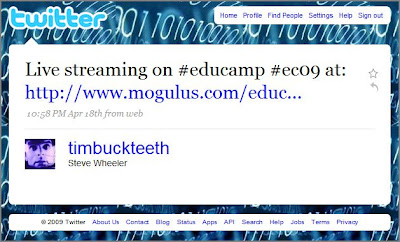 I have no idea why I clicked on the link. Maybe it was to test the livestreaming because I’d been experimenting with basic streaming from my phone. Maybe it was simple curiosity or perhaps it was an example of what Steve Wheeler called legitimate peripheral participation (lurking). Whatever the reason I spent the next 30 to 40 minutes watching a Skyped presentation in Bremen, Germany.

I was introduced to Edupunk, a term that’s probably familiar to many, but new to me. I watched with burgeoning interest as Mr Wheeler explained some of the ideas behind Edupunk, interacting with the class, answering questions and adding insights. You can view the Mogulus archive of it here (skip to 3:30) and read Mr Wheeler’s subsequent blogpost.

I think I’m beginning to understand Edupunk’s far reaching philosophy. It’s about teachers (and students) participating on their own terms. It’s cutting out the educational profiteers, directing financial resources elsewhere. Like using a Wii remote hack costing less than NZ$250 to create a multitouch digital whiteboard instead of paying NZ$3295 and lining the corporate coffers. It’s about finding ways to overcome barriers to learning by using, mashing and melding the available (usually free) tools. It’s dealing with lack of hardware by dragging things out of the bin and re-jigging them until they do what’s needed. Teachers have always done this in the classroom with the resources they’ve been supplied with, supplementing them with their own money, time and ingenuity. Edupunk brings this into the 21st century teaching and learning environment.

“I would even go as far as to claim that Edupunk teachers should be challenging the curricula they are required to teach, and especially the assessment methods that are imposed from on high. These are the structures that constrain education and stop learners from achieving their full potential.”* Read more here.

Lurking
Digressing slightly, Mr Wheeler’s response to a question, describing lurking as “legitimate peripheral participation” rang so true for me. For many it is a prerequisite to contributing. In my case lurking has led to commenting, connecting, collaborating and creating… participating and learning.

A year ago I wouldn’t have dreamed of writing this, but now I feel part of a global community, connected enough to comment and feeling that I have found my voice.

So what do you think? Does Edupunk encompass any of your teaching/learning? Were you or are you a longtime lurker?

I just had a most amazing collaborative experience.  @Mrs_Banjer tweeted on Twitter that she was in an etherpad opened by @mbarrow and would anyone like to come and try it out.  I’ve played with etherpad briefly, but not like we did tonight.

Each contributor is allocated a particular colour to help identify their additions and edits (there are eight colours).  We realised that only eight people could work on a document together at any one time when someone had to leave and was denied re-entry.  EtherPad isn’t perfect, but it is very impressive to watch up to eight live edits appearing on screen simultaneously.

After brief introductions and locations were informally exchanged we went to work, asking and answering questions, experimenting to test etherpad’s limitations and getting a feel for how it worked.  We shared links about software, tips about Twitter, but eventually settled to thinking about how students could use it.  About an hour after we first logged on (it didn’t seem like that long) we had co-created a list of ways that etherpad could be used in the classroom by students and teachers. Thanks to @mbarrow  for starting the etherpad and to @mrs_banjer  @scratchie @mwclarkson @juecov and others who popped in and out to contribute during the session.  Here’s the list we came up with.

This was a real collaborative effort and great fun too! Give it a go with some friends at http://etherpad.com/

Whichever blogging platform you decide to use, Windows Live Writer can be used to publish to it.

Installing is easy enough, just go to Windows Live and download the latest version.  Make sure you only select Live Writer for download, unless you want the other Live programs offered.  When installing uncheck the boxes that ask if you want to install the Microsoft toolbar or reset your homepage (of course this is up to you).

Once installed Live Writer offers a familiar interface for users, this was important in my selection of it as the blogging tool for children in class. Menus and icons are mostly self-explanatory, but if you’re not sure- hover over the item and a tooltip will identify it for you.  A sidebar contains other functions you will need, like insert, plugins, draft posts and settings.

To set up your blog go to Tools>>Accounts… .>>Add…>>Other Blog Service…and enter your blog details, user name and password. Pick “remember my password” so you don’t have to enter it every time.

To use Live Writer at school you will need to add the proxy details here. Once you’ve done all this you’re ready to post!

There are many free and paid tools available to publish and share children’s work on the internet. They can be used to engage and motivate children and can provide an authentic audience for their work.

Blogger, now owned by google, is an easy way to set up a first blog. It is highly customizable and allows you to easily upload photos, movies and other multimedia elements. it has a selection of themes to choose from to alter the page design. It does have an annoying navigation bar at the top of the page and a “next blog” link that can take the reader to some places that are less suitable for children. With a bit of tweaking and coding this can be removed.

WordPress became my blog engine of choice because there was no “next blog” link. It has many page templates to choose from, but is a bit more choosy in what it allows its users to upload. Images are fine and if you have somewhere to host your files you can also add a free audio player. Videos can only be uploaded after upgrading your account with an annual payment of US$20.

Both sites are very easy to join, needing only a valid email address (though I think Blogger may ask you to set up a google account). Click on the email you receive as confirmation and that’s it – you’re ready to go.

Sometimes the login pages of WordPress and Blogger can present children with accidental access to unsuitable material. To eliminate this I use Windows Live Writer, a free Mocrosoft download. There are other options – you can blog from Word with this blogger plugin or you can use Word 2007 which has a built in publish to blog option. 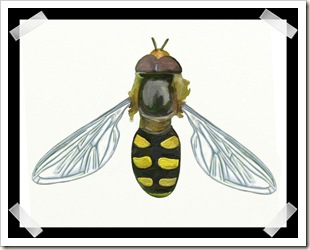 So, enough hovering.  Here’s where I’ll set up a portal for other teachers at school.

I’ll post links to software, sites and other items of interest and reflect on some of the things that have worked well for me in class and others that haven’t been so successful.

There are heaps of teacher/class blogs and wiki out there that I’ll add as links, but I’d like to think that colleagues at school will be more likely to try new things ICT if they know that this is my space and that they can discuss things with me if they want to.

I could introduce them to Twitter instead. I’ve been making class web sites and blogs since 2001, but always in isolation, an island entire.  Now, via Twitter, I’m learning from others again!  For years I’ve been the guru that people have come to for ICT help, but today I’m getting help myself from ethereal colleagues.  It feels good.

*Hoverfly “painted” in Artrage 2.5 – some post work (copy and flip the wing) in Paint.net

Where to start? I’ve hovered around the fringes of Web 2.0 for the past few years dipping my toes in the water here and there – time to jump in.

So.. back at school for nearly two weeks now and what have I done? Not a lot. I just can’t see a way to fit it all in and meet the requirements of “if it’s not on paper it’s not real”.

I’ve been back from Christchurch for two days now and the ideas are still buzzing so much that I can hardly get my head around the next few weeks.

We have to give a presentation to the Principal and Board of Trustees sometime in the next few weeks to show what we learned and to make suggestions for the future direction of ICT and learning at school. I have had the idea of trying to make sure that some of the Room 9 students are on the wiki during the presentation or perhaps inviting some of the twitter crowd to hang out that evening.

I’ll spend the next few weeks collating my notes and gathering my thoughts and themes.

Welcome to your brand new blog!

This is a sidebar and can be changed in Widgets in your dashboard.

You can also modify number of sidebars in theme options!